Although men can get breast cancer, women are about a hundred times more likely to get it than men are. Besides the fact that women have more breast tissue, they also produce more of the hormones estrogen and progesterone, which can promote the growth of cancer. Age is a risk factor for breast cancer as well, with about two thirds of breast cancer patients being above the age of 54. White women are also more likely to develop breast cancer than most other nationalities, although cancer in African American women is more likely to be aggressive, caught at a later stage, and diagnosed at an earlier age. 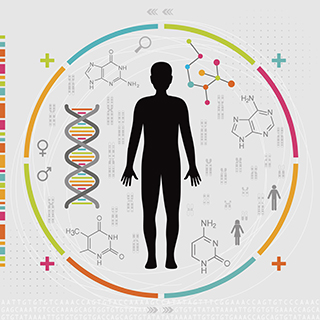 Between 5% and 10% of breast cancer cases are believed to be hereditary cancer. The most common genetic cause of breast cancer is a mutation in the BRCA1 or BRCA2 genes. In normal cells, these genes code for the production of proteins that prevent cells from growing abnormally. In other words, they indirectly prevent cells from becoming cancerous. A mutated copy of these genes, however, does not work as well, which is why women and men who inherit these mutations are at a higher risk of developing breast cancer (as well as some other cancers). This type of hereditary cancer often occurs in younger women and is more likely to affect both breasts. Other gene mutations can also put you at a higher risk of developing hereditary cancer, although these are much rarer than the BRCA mutations. Women who began menstruating early or who went through menopause later, and therefore experienced more menstrual cycles and the resulting hormones, are at a slightly higher risk of developing breast cancer. Women who have had radiation treatment to the breast area (e.g., lymphoma), on the other hand, have a significantly higher risk, especially if the radiation treatment occurred during childhood or adolescence. In addition, women who took the drug diethylstilbestrol (DES), which was given from the 1940s to the 1960s to prevent miscarriage, have a slightly higher risk of developing breast cancer.